What's on your mind Tiki?

When the tall Mr J passed me the mic I knew it was my turn. As much as I was nervous I was excited. I love that feeling. I was back on the stage waiting for those words .It's like time plays a game with you when you want it to slow down it speeds up. I could see my parents - that made my palms start sweating. The guitarists were in the wings waiting until it was our turn . By then I was as hot as a Ferrari's engine . Sione said those words 'Tiki whats on your mind?' I stood up, my heart beating as fast as it could. The guitarists were creeping on to the stage with their big guitars .

I turned on the mic ready to sing . Now that is a buzzy feeling . I opened my mouth and my little brother was laughing his head off. I started to sing with a smile on my face. I sang the first two lines and I was already dancing. The crowd was quiet so I thought they didn't like it. I started singing the chorus. My hips swaying, my mouth moving. I saw my dad then calmed down. That is one of those times when time plays that game with me. So I just let it slide. Before I knew it my song was slowly ending .I felt like everyone stopped.

I turned and thought seriously 'what's for dinner?' Then the crowd just let me have it they were clapping and yelling. That I will never forget. I looked at my dad and smiled he smiled back then I knew what was for dinner.

Big Thank You from Kalim! Hi! As you all may know my name is Kalim. I thank you for all of your comments. This has made me feel supported I feel more confident to get up on stage and perform for all of my fans. I thought that only my school would watch this movie but I was wrong . I am glad I could share that movie with you. A BIG THANK YOU!!!!!
From Kalim 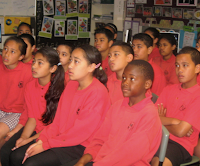 This morning we had another wonderful opportunity to meet with Dr Hamish Campbell and two new people. One person was Riria Hotere who has taken the place that Diana-Grace normally has and Dr Matthew. All three were great to listen to. It's amazing how much we can learn in such a short time. Matthew explained to us what life would have been like before the eruption in 79AD, how life would have been. It was interesting to learn about all the different gods the people worshipped in Pompeii. There seemed to be many. We were shown the plaster casts as well that were made when Pompeii was excavated. It's amazing to think that what stands now as the ruins of Pompeii was excavated because it was buried by the ash and rock that came from Mt Vesuvius. It was buried for 1700 years!

We were able to ask some questions throughout. The answers we received were so good - the team at Te Papa are so good at explaining things. We've posted some photos here of our VC with Te Papa. Students of Room 18 will be posting their reflections on their individual blogs soon. Some will have some short videos to share with you.

Thanks again to the team at Te Papa. We look forward to meeting with you again.

It's Thursday the 12th of November and we've just returned from watching films created by our very own teachers and students. I'm not just talking about Pt England but schools from all around our community. The hall was full of laughing, singing and dancing students as the movies were shown to us in the hour we watched. Our class had a movie too. We got to show it to our school on Friday afternoon. We've posted it here just incase you missed it. It's based on a topic that some of us have been learning about in our extension class. We hope you enjoy our movie.

Movie produced by Tanielu, Blessing, Moses and Leoden of Room 18