Vivienne, Shoal, Darius and Makayla recently attended an Interface XPO which was held at the Ellerslie Convention Centre in Auckland. We were kindly invited by the editor of Interface Magazine, Greg Adams, to produce a short film about the day. 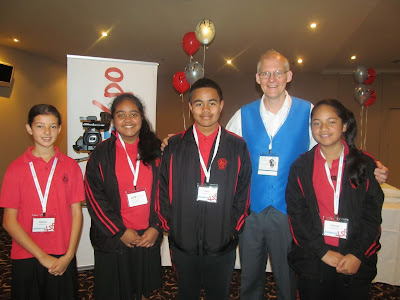 There were a range of presentations from Gold Sponsors: TTS (Telco Technology Services), Cyclone and Isometric Solutions as well as others. The students enjoyed filming and interviewing sponsors about their products. They also got the chance to capture a few thoughts about the day from some of the people who attended. A big thanks to Mrs Burt, Mr Adams and Interface Magazine for this amazing opportunity! 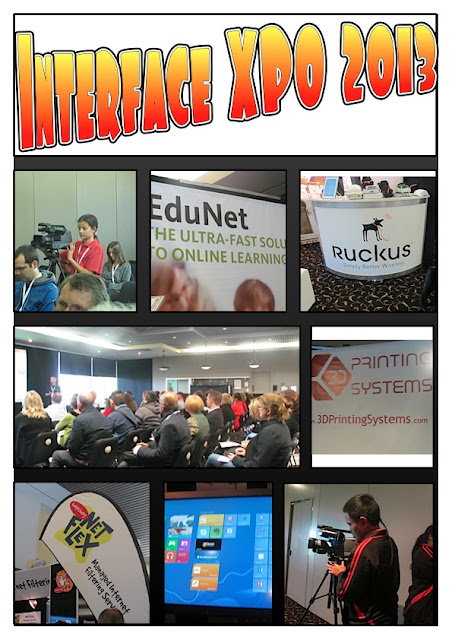 INTRO:
You may have noticed our school on TV as well as the one and only Will.I.Am. The reason for this is that Will.I.Am gave us a HUGE koha. A koha is a special present. That's what we were given. A $100,000.00 check for the manaiakalani program  I know it is going to go for good use like our net-books and other things.  The story of Will.I.Am coming is pretty long. Let me start from the beginning, it all began with an assembly on Wednesday 08 of May....

STORY BEGINS:
Everyone was waiting anxiously for Mr Burt to walk into the hall with either good or bad news. He finally walked in and told everyone that we were having a very very special visitor coming in tomorrow. Apparently he was more important then John Key. I mean, who is more important then the prime minister. The sad thing though was that Mr Burt wasn't able to tell us who the special guest was. If he did tell us who it was then the special guest wouldn't come. But, the only thing that we were told was that he was really into music. Straight away the person in my head was Stan Walker.... Or the x factor judges. When our short assembly was finish all the prefects had to go to Mr Burt for a quick meeting.

When all the prefects arrived we were given important tasks for Thursday.  Some people were given the task to take pictures while the others had to greet the special guest. Me on the other hand had the most difficult task of them all. I had to say another Tongan prayer! When I was told I was so nervous and excited at the same time. When Mr Burt was talking to us, someone asked if we could find out who the special guest was. You would think that he would tell us, but NO!!! The only thing he told us was to not even talk about it. Not in class or with our friends... When we finished our meeting though, we went back to class.

I went home and thought about it. I'm sure everyone did. Then on 3 news it said that Will.I.Am was in New Zealand and that he was going to come back to do a full tour. The thought came into my head that the special guest was going to be Will. I. Am.... You never know... But then I said to myself 'naaa.... He is way to famous to come to our school. I mean, out of all the schools in New Zealand there is like 1/100 chance that he would come to our school.'

It was Thursday. The day everyone was waiting for. The day when the special guest was going to come and visit our school. It was basically the main thing on everyone's mind. Straight after morning tea everyone went into the hall for Mr Burt to tell us the big news and other things like to not stand up when we see the guest and to sing our school song properly. But everyone was waiting for the big news. Even I was. He finally got up to the part when he was going to tell us. Who is it??? Who is it???Who is it??? It was the only question in my head. "Who knows the band Black Eyed Peas?" Mr Burt said to us.
"Or  course... Will.I.Am" people were saying to there mates beside them.
Everyone knew now so the only thing that they were waiting for was the actual visitor him self. It took a while because of traffic but he arrived. 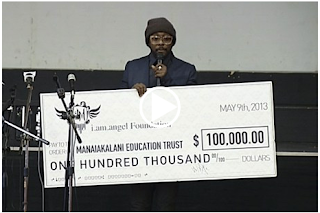 International Superstar Will.i.am from famous Hip Hop group 'Black Eyed Peas' visited our school. What an amazing experience for our children. Here's what Makayla had to say about it:

I felt pumped and exhilarated as I remembered that the big cameras for the news and popular shows were behind me. I also felt inspired because of the generous donation that Will.i.am gave the Manaiakalani schools. It was a lot of money ($100, 000 by the way!) to help with our classrooms and e-learning tools.


I am an inspired student right now and I am very excited to see what new guests will be brought to us and our school. Thank you Will.I.am for supporting our school!

Please check out our blogs to find out more about this amazing experience!