This year we celebrated Niue Language week, by sharing short movies about our language and culture on PENN (school news network). At the end of the week our Niue group performed an item. The following movie shows our item from the Niuean group who performed at assembly during Niue Language week this year.

Thanks to Ms Lavakula organising the group item. Ms Lavakula also contributed movies to share on PENN, our school news network. Thanks Ms Lavakula and the awesome Niuean group!

Niue days of the week from SchoolTV on Vimeo.

This was also the Niuean group item at our school FiaFia this year.

Niuean Group from SchoolTV on Vimeo.
Posted by Mrs Lagitupu at 4:01 PM No comments:

Do you remember when you were only 5 years old? Turning 5 is such a milestone in our lives because that’s when you get to start school.

By the time you reach Year 8, you will realise that everyone’s journey through school is different. Whatever happens, school is a time to enjoy being young, to learn, to be creative, and to create special memories.

We hope that your experience at school inspires you to be the best person that you’ll ever be.

Enjoy our movie created by the Year 7 & 8 Extension group. A huge big thank you to Matua Lewin (Teacher) who is the person singing on our soundtrack.

(song inspired by 'Seven Years' by Lukas Graham)
Posted by Mrs Lagitupu at 9:00 AM 49 comments:

The Legend of the Lost Tribe

Did you know that Kupe was probably the first explorer to reach NZ? Early Polynesian explorers used traditional navigation methods to guide them on their voyage. But what would make someone leave their island and travel thousands of miles across the ocean?

This movie was created by our Year 5 & 6 Extension students. First they wrote stories about Maori and Pacific warriors. Then they created a graphic of their own Maori or Pacific warrior on Hyperstudio. Each student can be seen fighting with their warrior in the movie. Check it out!

(Special thanks goes to Mr Jacobsen for his fantastic narrating skills!)
Posted by Mrs Lagitupu at 9:00 AM 12 comments:

Our school art exhibition was held this week. Mr Jacobsen spent countless hours setting up the hall for our art displays. The final product was magnificent.

PES Art Exhibition 2016 from SchoolTV on Vimeo.
Posted by Mrs Lagitupu at 4:22 PM No comments:

This term the Year 8 Sorority netball team participated in the SkyCity Mystics 'Positive Sideline Behaviour' competition. The task was to create a brief movie showing their thoughts about what positive sideline behaviour means to them. The team worked together with their coach Moses and managers (with some help from their teachers) to create their movie.

The Sorority team movie was a finalist along with Whangaparaoa College. Both movies were posted on the SkyCity Mystics Face Book page where voters had to vote for their favourite movie. In the end, with the support of lots of teachers, friends and families, the Sorority team came out on top and was selected as the winning movie.

Their amazing prize package included free tickets for the team to attend the SkyCity Mystics vs Mainland Tactix netball team at The Trusts Arena in Henderson on the 2nd July 2016. They received a $400 voucher for Andy's Burgers and Bar Restaurant (SkyCity) and an overnight stay in 10 rooms at SkyCity. Amazing! They even got to see the Warriors team at SkyCity!

Another highlight was that a couple of members of the team (Khaia and Taunese) got to meet the Mystics team in person. They delivered a speech to thank them for the prize and were allowed to present them with their new netball uniforms. Very lucky girls indeed!

On behalf of the team and school we would like to thank Sarah Brierly, the Mystics Netball Team and SkyCity for the awesome prizes! It was definitely a weekend to remember!

Thanks to Marilyn for putting this movie together.
Posted by Mrs Lagitupu at 4:16 PM No comments:

Once again a group of students took part in this years 40 Hour Famine. All money raised this year will go towards helping Syrian refugees. There is also the possibility of the government matching this years fundraising efforts which would be fantastic!

The group participated in a sleepover at school on Friday during the official 40 Hour Famine weekend. We played games, performed items, watched a movie, posted blogs and more to help keep our minds off the thought of going without food. Luckily there was plenty of barley sugars, Just Juice and water to keep us going.

On behalf of the Famine Team, I would like to thank everyone who has supported our participants by sponsoring them.

Check out some of the students blogposts about the Famine Sleepover:

Last week on Friday the Extension group and a group of students from Teams 4 and 5 went to Q Theatre. This was part of the Docs4Schools programme which provided screenings of international documentaries to schools. This was a great opportunity to view films that are not often watched by many of our students.

The first movie was called 'I am Eleven' which was an award winning documentary created by Genevieve Bailey. It was a beautiful movie about a group of eleven year olds from around the world. They share their hopes, dreams, thoughts, and life in general. 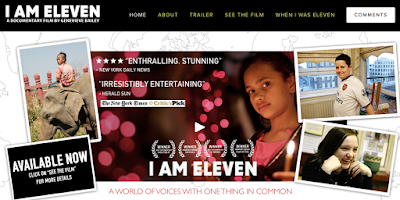 Trailer for 'I Am Eleven'

The second movie was called 'Winning Girl' and was about a young girl who had hopes and dreams of becoming a world champion in the sport of wrestling as well as judo. This was an amazing and inspirational movie about setting high goals and working hard to achieve them. 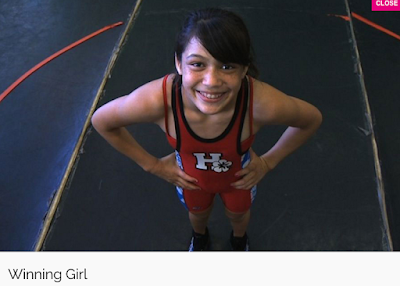 We also enjoyed lunch at Aotea Centre in between watching the movies. 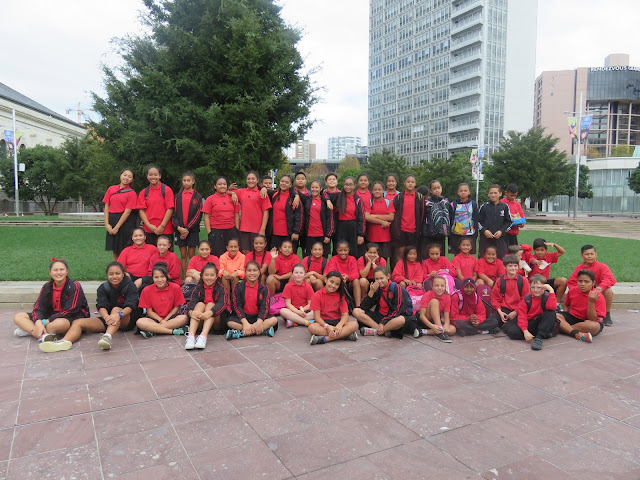 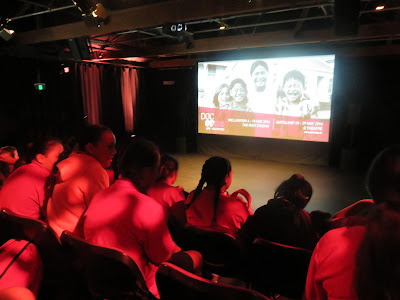 Docs 4 Schools offers school students: year 5-13 the opportunity to attend free screenings of the latest documentaries from around the world. The documentaries have been carefully selected from the Doc Edge Festival programme to interest students and support the New Zealand school curriculum.

Celebrating our different languages and cultures has been huge at our school so far this year. From our massive Fiafia event in Term 1 to this weeks focus on the Samoan Language. Samoan language videos from our archives played on PENN (Pt England News Network) throughout the week. Today at assembly it was a privilege to see our Samoan students share their beautiful language and culture with the rest of the school.

And just in case you missed it, here are our Junior and Senior Samoan Group items that were performed at our school Fiafia event in Term 1.

This term the Year 5 & 6 Extension group are focusing on narrative writing and art. They will need to write an interesting narrative based on a Polynesian warrior. They will also look at Maori and Pacific cultural tattoos, designs and art to help inspire their artwork.
Posted by Mrs Lagitupu at 10:22 AM No comments:

This term the Year 7 & 8 Extension students will be focusing on the art of Colin Thompson who is an author and illustrator of children's books. They will need to write their own interesting narrative and then create a piece of art inspired by the style/artwork of Colin Thompson.
Posted by Mrs Lagitupu at 10:17 AM No comments:

The following movies are MTV's created by our Year 5 & 6 Extension group. Their task was to create an MTV to show what the Pt England Way is all about. They needed to show how we learn, create, and share at our school. They movies were filmed and edited by the students.

Simon Group MTV from Team 4 Pes on Vimeo.
Posted by Mrs Lagitupu at 10:21 AM No comments:

This term our Extension classes had to work in small groups to create an MTV about the Pt England Way. The Pt England Way is all about the way we do things at our school. One of the criteria was to show how we could make kindness go viral (theme for the year). They also needed to show what 'Learn, Create, Share' looks like at our school. The learners scripted, storyboarded, filmed and edited their own movies.

Here are the movies that were created by our Year 7 & 8 Extension group:


I GOT SKILLS TJZMS from Team 4 Pes on Vimeo.

Posted by Mrs Lagitupu at 8:58 AM No comments:

The Treaty of Waitangi

The Treaty of Waitangi was first signed on the 6th of February in 1840. A public holiday is held to commemorate this significant event.  The following movie was created by a group of students from our school back in 2013 who were lucky enough to visit Waitangi in the Bay of Islands. This was an incredible opportunity to film on location where the original event actually took place. This was also part of 'Our Nations Children' project between the Waitangi National Trust and Westpac. The 3Ps of Protection, Partnership and Participation are an important part of the Pt England Way.

The film was also screened at the Manaiakalani Film Festival in 2013.
Posted by Mrs Lagitupu at 4:14 PM No comments: 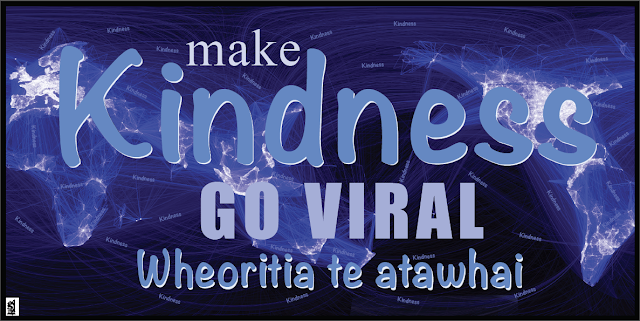 This is our theme at Pt England School for 2016. We are looking forward to meeting our students on their first day back at school next week on Tuesday. What a great start to the year if we can 'Make Kindness Go Viral'!

(Thanks to Mr Jacobsen for the image)
Posted by Mrs Lagitupu at 3:02 PM No comments: