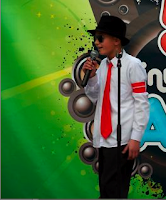 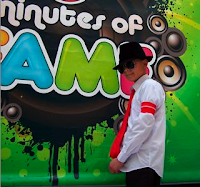 Kalim did us proud Pt England! He had the difficult task of being the very first performer on Monday. The audience were treated to Kalim singing as well as some very slick moves across the stage. Proud Pt Englanders and family members were in the crowd cheering.
Kalim sang 'I want you back' by the Jackson five and then followed it up with a dance routine to a song by TPain. At the end of the performance we watched 3 more items - all varied in style and talent. The winner was announced. This time round it wasn't Kalim, however we know that it's a great start for him and next time he will be even better. Thanks to Mr Jacobsen for the great photos!
Malo lava le taumafai Kalim.

There have been invitations for entries to Westfield's 5 minutes of fame competition. Kalim - one of our talented performers has decided to enter himself on behalf of Pt England Primary. We are hoping that the competition organisers will visit our class blog page to see his talent! You never know - we could be posting his '5 minutes of fame' some time soon. All the best Kalim.
Room Eighteen
UPDATE!! Kalim's entry has been accepted and he will be performing on Monday the 13th July - 11am at the St Luke's Westfield. Let's get there and support him!
Posted by Room 18 at 4:24 PM 20 comments: