Here's a little riddle: what do most people look forward to, is very competitive and is kinda like a battle of the fittest ?...Cross country !

Every year, we hold a cross country race. The way its usually set up is in age groups but this year it was a bit different. Instead of age groups, we just raced in years. For example all the Year 7 girls race each other, Year 7 boys race and so on.

Something that was also a bit different was the race course. Instead of just a run around the reserve and back to our field, we ran a race course that was 3.5km ! But luckily for the Year 7's, they only had to run 3km.

As soon as the Year 7 boys were out of sight, the Year 8 girls lined up along the starting line. Miss V explained the race course to us and we waited anxiously for Miss V to clap the clapper. "On your marks" she started "get set..." CLAP ! As soon as we heard the 'clap' we shot off like lightening bolts and tried to overtake each other.

We hadn't even gotten to halfway when we saw the boys catching up to us. Most of us girls started sprinting as soon as we saw the boys, but others were calm and collected and didn't even try to keep in front of the boys. Unfortunately, I was one of those girls. Taking our time, kind of just strolling through the bush.

For a while we started to just stroll along, but then we felt quite de-hydrated so we started to power-walk. A long while later, we saw our school poking through all the ferns and trees, so we started to walk faster. We had nearly gotten to the finished line when we were told by Mrs Lagitupu that we still had 1/2km to run. Puffed out, we went back to walking and finally got to the finish line.

I had known that I wasn't going to come first because I was competing against people like Etta and April. But my goal was to not come last and guess what? I didn't !

All Blacks at Pak'nSave Glen Innes 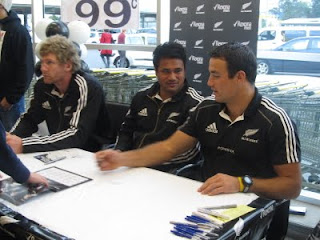 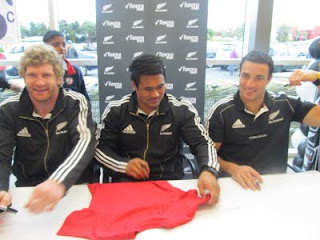 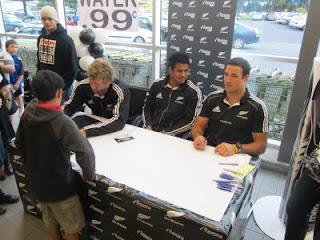 All Black players Richard Kahui, Isaia Toeava and Adam Thompson drew a huge crowd of All Black supporters at Glen Innes Pak'nSave last week. Excited children (and their mums) eagerly waited in the queue to get an autograph, photos and the chance to meet some famous All Blacks. Many Pt England students were lucky enough to meet their stars. Go the All Blacks!

Keep Your Eye On The Ball

Term 3 is already underway as 'Rugby World Cup' fever hits our school. As usual, immersion assembly was an exciting event with teachers out in full force dressed up as rugby players. Mr Burt and his vendors issued tickets, food and drinks to many lucky students in the audience. Mr Jacobsen could be heard shouting "Ireland!" every so often, as he was fully garbed in Irish colours. We were also treated to an amazing movie about a famous former All Black, the legendary George Nepia. What a great start to the term!

Posted by Mrs Lagitupu at 4:34 PM No comments: